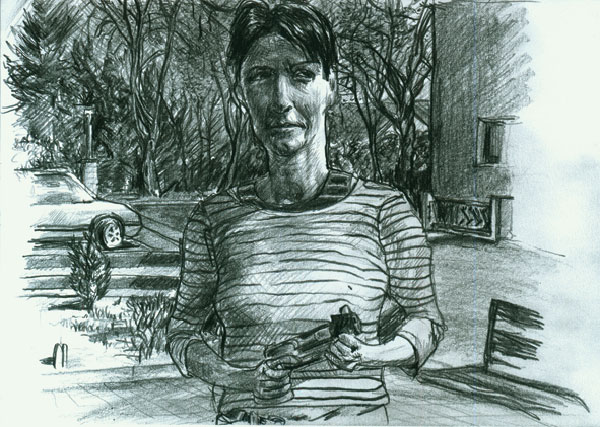 Max Müller was born in 1963 in Wolfsburg, and is an author, musician and draughtsman. The subjects of his handmade drawings include portraits, popular and socially critically scenes; reproductions of magazines and newspapers. Compared to the sources of the images, Müllers works develop a difference through their proportional and structural deviation of his drawing gesture and the commentary titles. The colour- pencil and ball point pen worked sheets swing between the poles of describable reality and its relative aspect. Together the pictures and the text develop a relevant relationship. They work as a supporting polarized couple. Parts of the image are distorted, other parts are merely suggested. In this way the title commentary, omissions, and emphasis structure the reception of the picture. It creates an enigmatic trace of the conscious use of information. Max Müller is working in this slightly in between space, the discovered contradiction, an inexplicit covering which shows up gaps of interpretation, missing information or its overload, and their own apprehension that approaches the truth. Besides various band- and solo projects Max Müller has since 1986 been the songwriter and singer of the still active band “Mutter”. Actually he shows with his solo album: „Die Nostalgie ist auch nicht mehr das, was sie einmal war” brilliance in text and music.