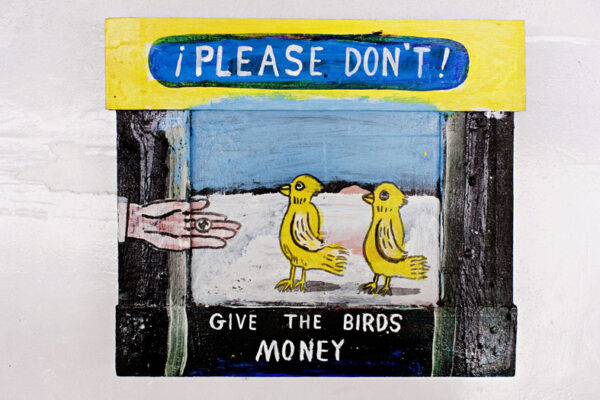 Bob Tookes´art work could be seen as a continuation and new developement of classic american folk art. After his art studies at Baton Rouge, Louisiana, and the completion of his “Master of Fine Arts” in 1991 he went to Hamburg. Besides his art work  he has also worked as a musician. Over the years Bob Tooke joined in several group- and solo shows in Germany, Europe and the U.S.

The unpretentious naïve style of his paintings is thematically connected to his music and his song lyrics. The works show a joyful but mysterious humour. For the paintings he uses leftover pieces of wood, wooden boxes and lost properties that come from commercial and urban contexts. Thereon the painted scenes are  narrative and playful and in the same way enigmatic. The artists´ painting is laconic, transporting through his spontaneous gestures, collecting the fleeting impressions  of  moments. Subjects and text show in their direct confrontation disastrous  realationships and stories. Portraits of the heros of Country and Blues standing opposite a series of burning tour busses and private cars, who represent the artists of mainstream, that should dare to verify itself. Beloved and unloved show up obsessively worked out in ironic series, existing equal to each other. This implies the conception and joy of transforming and expressing a culture that is critical of commercialism.