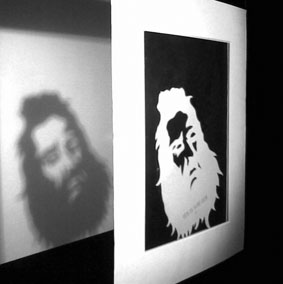 In his 1899 text “Screen Memory,” Sigmund Freud considers how memories are permeable and can be recalled in an altered state. The screen memory refers to the temporal separation between the consciousness and the object of memory. In 1925, Freud revisits this concept in “A Note on the ‘Mystic Writing Pad,’” in which he suggests a common children’s toy might be a metaphor for the way that memories accumulate in the mind. With the lifting of the transparent top page, figures are erased, and new drawings can be made; however, the pressure of the writer’s hand leaves behind traces, recorded on a medium just beneath this diaphanous surface. With reference to these ideas, the exhibition “In a Shadow Box” will transform the gallery space into a dark room for exploring the ontology of drawing. Like a shifting archive of images, unique drawings will appear and dematerialize into shadow and light through the media of transparency and glass. The viewer is invited to take part in an associative thinking process about the latent strategies of remembrance. Images will fluctuate upon the wall as if those imaginings of the mind, which Schopenhauer once described as a kind of cognitive projection, can be rendered ever more fleeting and ephemeral.