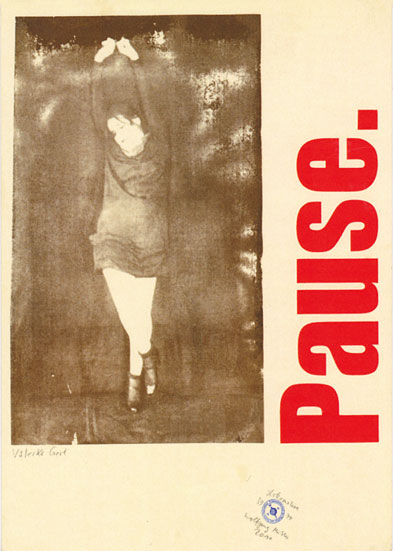 Starting January 2011 Crystal Ball presents Wolfgang Müller´s „Lokomotion-Valeska Gert“, an installation of his same titled silk screens. The gallery space will become a break room. A place of persistence and hesitation is developing. With these silk screens the radical performance Pause by Valeska Gert (1892 – 1978) will be put forth. It is based on the only existing picture document, a 1928 printed photo.

At the same time to this, the exhibition “Pause. Valeska Gert: Bewegte Fragmente” at the Hamburger Bahnhof, Museum für Gegenwart, will run until the 6th of February. The show is currently curated by An Paenhuysen and Wolfgang Müller.

Concerning Valeska Gert´s Pause: In the cinema of the 2oth century due to the change of the film acts there were breaks. The managers of cinemas charged artists and musicians to fill in these gaps and bridge these technical discontinuities with short appearances.

Valeska Gerts dancing performance basically and radically experiments in her special realistic aesthetic with the trivial limits of technology. She materializes and doubles phenomena of discontinuity with her body, working with it as a substance. Therewith she opens a fundamental intermediate position to the mainstream during that time period it brought out in the euphoria of the futurists or the cultural pessimism of the conservative revolution.

The artist danced the Pause, using short and single movements that lead to a gesture with crossed arms overhead – and remained frozen “until everyone in the audience felt what a pause implies.” This Non Movement lasted till the end of the film break. “For all arts that are movement, like Happening and Performance, Pause of Valeska Gert is fundamental and similar to the composition 4´33 of

The installation „Lokomotion“ shows three silk screens which Wolfgang Müller created together with his assistant Hrafnkell Brynjarson from the only reproduced photo of Gert´s performance. The way of a technically established pause with the use of materials and body, displays Gert´s motion of repose. It also focuses a basic question of mankind: An ancient minimal definition of life is the possibility of animation from place to place (Loco-motion). What if the place itself moves? – Human being as a self animated movement? “Pause”, turns into a fundamental political issue and is emblazoned in red letters like the word “strike”!

The gallery invites everyone to meditation, contemplation, providing one leisure in-between calculated economical profit and our right on laziness.