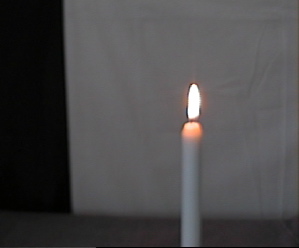 In her work Ioana Alexe reproduces in various ways pictures, icons and objects of the art world. The mediated appearance and manner of transfer convey the intentions of the artist. In her video work “Untitled” Ioana Alexe puts back painting to its time-based context of creation. As such she reproduces one of Gerhard Richter’s famous candle series cinematically and traces in a “Performance of an Image” the burning candle for 7 hours and 39 minutes. Essentially, it is not so much the mere reset of the iconography of the imagery, but its deviation in the display of lost images, represented by recorded moments of the slowly burning and expiring candle. With the activated relation between a recollected well known image to its cover version, a “fictional” unspectacular documentary, interpretation amplifies about personal impressions using the pretended dissolution of the quotation.

In the semidarkness of the exhibition Ioana Alexe shows in connected installations a table with books. Volumes out of wood in different sizes are the basis for reproduced and hard covers. Sensitively painted dummies: Art books and anthologies operate here as doubles whose viewing expresses concealment. In a denial of the object in which also a personal language is preferred instead of a precise copying, the subject is art itself and its displaced signification. The artist works with both complex and deficit strategies of transmitting images into a new vision. With smooth adjustments Ioana Alexe shows that there are several options for interpretation that are relevant for its proposition. The impact is a wide perspective which articulates the subjective and doesn’t exclude it in its appreciation.