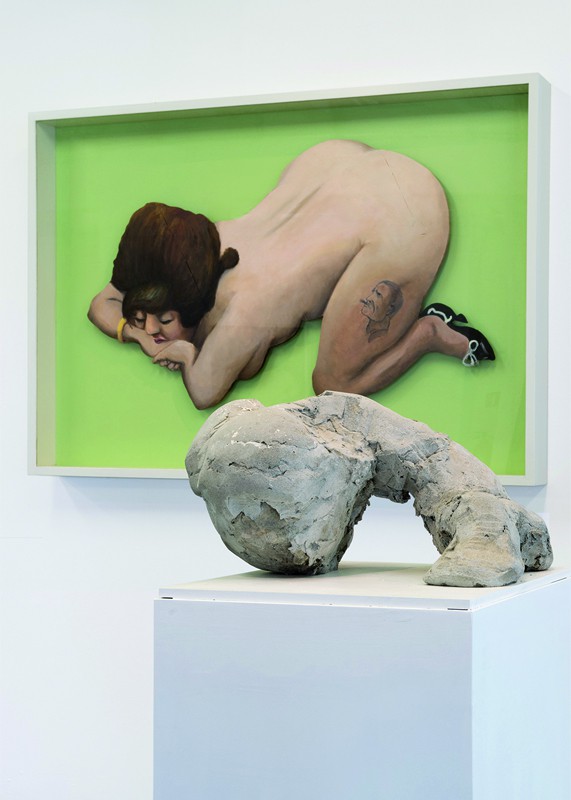 he two artists from Bremen thematise with Mare Liberum, a principle originally from the 17th century, for the free use of the oceans also their personal artistic sense of freedom as a metaphor. In modern times, even the great indomitable seas, although at first on a cartographic level, are put to fragmentation and division into zones of possession and regulations. How does it stand there with the artistic freedom in a time of so-called past contemporary art? Both artists of the exhibition duo refer to it differently but open an interaction. Tom Gefkens playful works combine art historical quotes with certain forms of presentation and materials to associatively image objects. The often painted images, with wellknown female nudes, are fragments of shattered wooden crates. The pictures of the exhibtion seems to have been shipwrecked already in Gefken work and the “contemporary accident” is clearly obvious like an evolutionary relict preserved behind glass. Rainer Weber works in his sculptures with a fundamental equation of the materials and the motivic goal of a purposeless form. Concrete artifacts such as films, reinforcement and construction waste as cement, metal and plastic are put in together and Weber synthesizes unreasonable objects. The work has an aura of autonomy and ease that is based in their anti-functional strategy. In Mare Liberum a liberal aura of art after the “accident of the contemporary” appears.
At the opening of the exhibition, the artists will customize the visitors on request exclusive ballpoint pen tattoos.