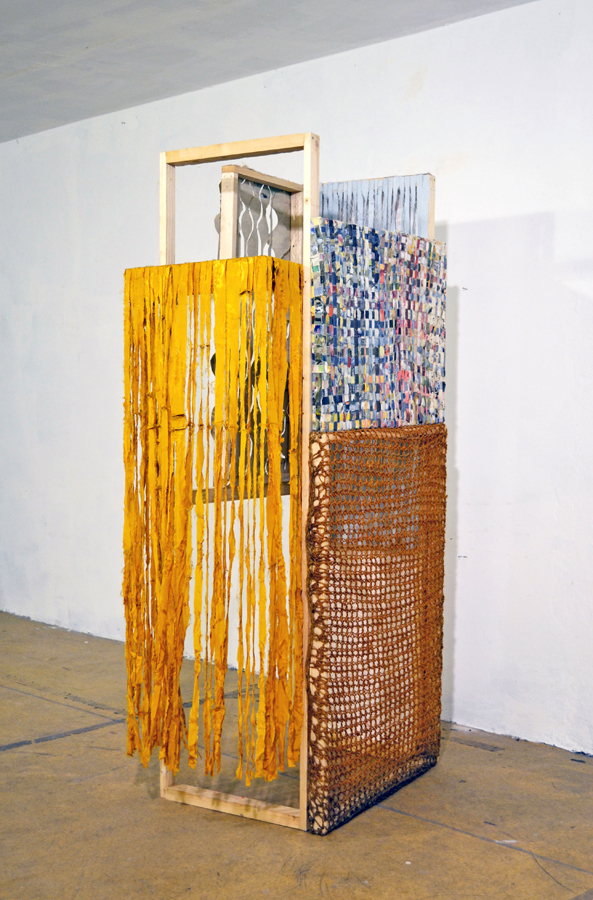 Gabriele Regierts Art shows a special presence, which is created by a virtuoso language of her objects. The artist’s installations, superstructures and objects create a free effect that also moves outside the classical art context. One could claim that they operate contrary to conventional conventions of attention and awareness or set counterpoints through their phenomenology. Their reading and reception is rather performative, because one seems to create a way of seeing the objects and in the installations. Some works sometimes seem unfinished or even accidental, and certain interventions allow us as viewers to wander into hypothetical assumptions. Has the built-in hardboard in the object been designed by the artist or has it been painted by a child before? Is it created or staged? The equality of materials as affect supports a special presence in limbo. It is the presence of the lapidary and the trivial, the forgotten, placed on the road, of the retired thing, which conquers its new meaning. This is precisely the creation, the talent of the artist governed to create a meaningful openness in a long-lasting work process. Contrary to the unambiguousness of an artist’s design, or even a stricter, market-oriented concept, it increases the freedom of works of art in an immanent manner and makes them disappear for us, partly materially. They show a lost functionality, a more reminiscent form, better establish an association, to something intangible, which nevertheless appears and appears. Things themselves are fleeting and unstable, almost spiritualized in their intermediate world. It is also unclear where the work ends or begins. Where is it unique? Where is it equivalent or belongs to something? Irretrievable original becomes material. Own and foreign painting is torn into stripes and weaved into new surfaces or pulled over wooden bodies and enters the room. Own and found. The collected, the left, the processed parts, the tracks and workpieces communicate. The old with the new. The secret and the obvious. The relationships, the connections of things. The archive says: “A big curtain for small pictures”. Gabriele Regiert is a responsible collector and archivist, a precise and unimpressed artist. Your things get to their ideal place at the right time. In the context of material, they occupy a place in this world that suits them and also explains it intuitively. Especially amusing and downright ingenious when a new series of works for the exhibition in Crystal Ball again play “works of art”. Some wooden parts, screwed together, screwed and sawn in, form a wooden body and reach into the room sculpturally. They are true performers. They are not only bodies, but they also embody.