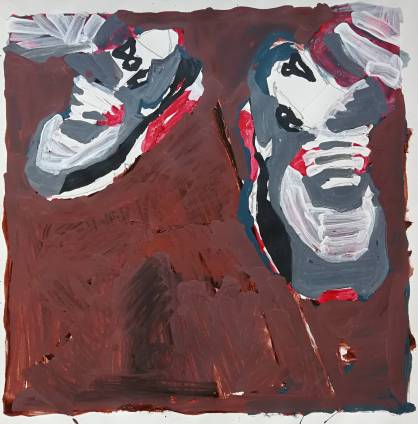 The two-dimensional, unpretentious pictures seem to leave it up to colour alone to construct the motif. They bear witness to a high degree of infatuation with the material, which in the process effortlessly and unheeded overcome the difficult boundaries between abstraction and pictoriality, material and effect.

Hyske Hilgenga’s striking sneakers have an aura that is as light as it is ironic. They do not add another plastic garbage to our crowded world of goods, for their debut nobody has to spend the night in front of a shop.

No, they reflect their quoted subject-object relationship quite simply and playfully in that of art. One can also read a subversive commentary on toxic high capitalism in this strategy.