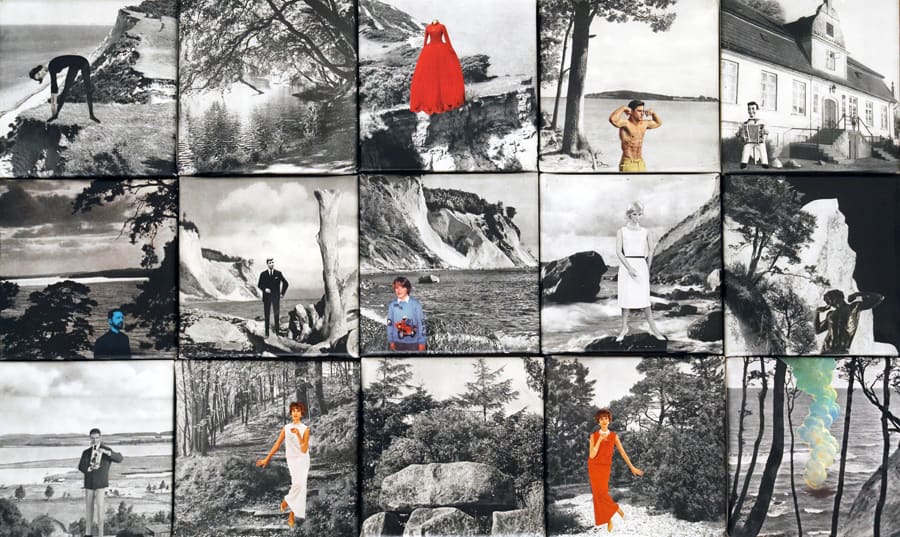 On March 31, 2021, the Berlin publishing house Art in Flow will publish a collage story by Manfred Kirschner as a printed art book.

From the press release:

What are old-fashioned photo albums other than testimonial picture books, which tell stories about a chronological collection of photographs or allow associations to be made. Being aware of this from the very beginning of his work the artist Manfred Kirschner used these albums to create life stories and histories of his protagonists: The fictitious life story of an American artist in the 1960s or short photo stories in which collages are placed instead of album photos and represent them. Once one has accepted this surreal change, one is quickly immersed in the logic of a parallel sphere, a fantastic imaginary life story that wrestles with reality, from a time when photography still surrounded the aura of the authenticity.
It was precisely in the early 1990s, with the onset of digitization and the reversibility of the processes, Kirschner began his serial collage stories and photo albums.
Now he has presented a first printed volume. His two-part collage story so far. “Going Crazy in East Germany – Rügen mon Amour” recounts in a light, humorous tone the turbulent travel adventure of Harald Baumeister, a Berlin-based
artist who, disappointed by his friends, travels to the Baltic Sea in search of meaning. The book is based on collaged landscapes that function like “film sets” for the artist. Through his technique, Kirschner associates a fantastic German
pictorial history in which fiction, the past and the present merge. The genre of narrative humorously illustrates a reflection of life. The protagonist Harald Baumeister appears like an alter ego of artists in crisis. An inner and outer
journey that should lead him to art and ends in life. With hallucinations and and lovesickness, he gets lost in an ironic conundrum of identities around a magical snow globe and in the end surprisingly finds friendship and love.

The artist’s book will be published as part of the Crystal Ball Book Salon, April through June 2021, at the
Crystal Ball Gallery.

The book is availible in our shop