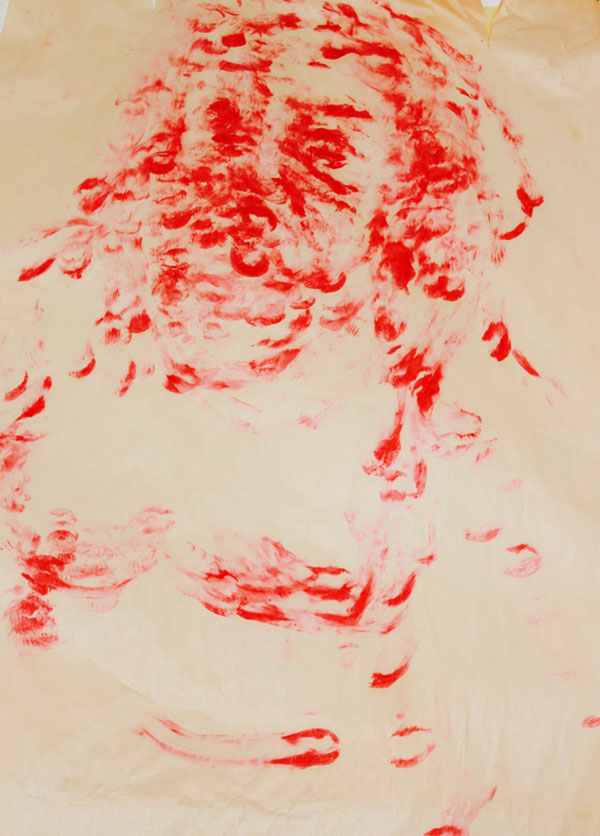 Evita Emersleben shows her performative art here once again in a conceptual context that gives rise to a new series of works. She kisses the drawing paper and thus „prints“ in a processual performance, portraits and pictures with her mouth. In complex work performances, the artist has already had the works of art themselves cast, moulded, cut up, served and eaten. Her most recent performance was as a meat saleswoman, selling her works in portions by the gram. The artist Evita Emersleben works on a holistic form of her works in that the products, the interventions or the actions are always an equal part of the artistic practice. The work action: kisses set sensitively and accurately, which build up her prints, is therefore just as important as the artifacts themselves. If we understand the paper, the canvas or the painting grounds as the classical medium of the artists*, Emersleben plays with a universal, the desire for artistic affirmation in this amusing series of works. But the gestural phatos of the production of the lipstick pictures, together with an almost absurd motivation, creates a wonderfully serious and ridiculous ambivalence that touches us in our own living context.

The exhibition is kindly supported
by the Karin and Uwe Hollweg Foundation.

Vikendi Kominski – One or several  Wolves